Letter to the Ed.

I wrote a letter to the New Orleans Times-Picayune, in response to a letter they published today. (Click on the Title if you want to read the original.) I have certain pet peeves, things that push my button, and this Ms. Foster trotted out one that particularly annoys me. It's said that Disreali remarked that there were three kinds of lies: lies, damned lies, and statistics. This so-called statistic is one of the worst offenders, and demanded a response. I don't know if the T-P will publish it, but hey!, that's what blogs are for. I'll just publish it myself!

Adele Foster writes (letters, Feb. 27) that a gun in the home "is 43 times more likely to kill a family member or friend through suicide, homicide and accidents than to be used for self-defense (New England Journal of Medicine)."

Oh, please. Since the study that produced this "statistic" was first published back in the mid-1980s (and what was a medical journal doing studying criminology anyway?), it has been repeatedly debunked as fatally flawed in scope, methodology, and even basic definitions. For example, this figure assumes that the only way of using a gun in self-defense is by shooting somebody, rather than by brandishing it and scaring an attacker off. And under the terms of the study, a drug dealer murdering a hated rival counts as a "friend" shooting a "friend." Sorry, not in the real world.

There may be lots of good reasons for not wanting to have a gun in your home. But pseudoscience like this study, by a Dr. Arthur Kellerman who, again, was not a criminologist, is not among them.
Posted by Steve T. at 2:55 PM 2 comments:

Well, they're here, and in force. Which means that once again it is Carnival time in New Orleans. ("Carnival," not "Mardi Gras." Mardi Gras is one day only, next Tuesday. Carnival is the whole season.) I may comment on my experiences now and then, as I come to it from an unusual perspective: right on top of it, or vice versa. I am one of those few people who live directly on the uptown parade route. I look out my kitchen window, and there they are, and in fact, they are there right now, with the Knights of Babylon getting ready to roll in about ten minutes. It is pretty exciting for the first few years, but the relentlessness of it all can wear you down. (Yeah, I know, cry me a river. I'm sure there are millions of Carnival fans who would kill to change places with me.)

But I did see something last night I'd love to share. Last night's first parade was the Krewe of Saturn, which always features political satire. The theme this year was "See You In the Funny Pages," and various political figures, most of them local, were satirically presented as cartoon characters. New Orleans Mayor Nagin was Charlie Brown, President Bush was Superman ("leaping small countries at a single bound!").

And Yasser Arafat. . . Well, I'll just say that it was very funny, very appropriate, and very gratifying. Just scroll down to the next few posts. That's my kind of satire. 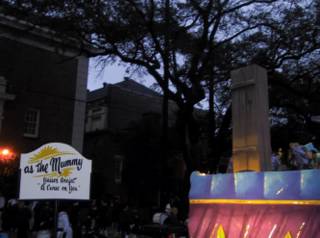 Normally they would have a large image of the cartoon character, but in this case I like this much better. Some people have thought Arafat belonged in one of these for a long time now. 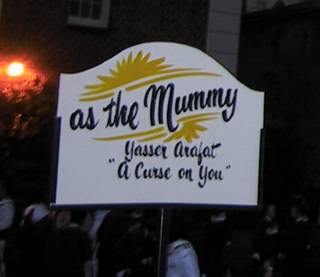