The European Union has treated us to a bumper crop of bureaucratic foolishness, but this one's a whopper. In a regulation to become effective in July, the Boys in Brussells have found a new item to place under restriction as a hazard to health and the environment: pipe organs.

It seems the member states of the EU passed a law restricting to a tiny percentage the amount of lead that can be contained in electrically powered devices. Pipe organs use lots of lead. Most of the pipes are almost entirely lead, in fact. The wind chests are kept full by air supplied by a pump, and those pumps are powered by electricity. So there you are.

How could such a crazy thing happen? Sheer sloppiness. The law was intended to deal with electronics like outdated cell phones or computer circuit boards. If these are dumped into landfills, the lead can leach into the environment and be a true hazard. But they didn't bother to specify the target of the law, so they wound up targetting by accident a technology whose hazards, if any, we would know about by now as we've only been using the things for two thousand years. (Literally. The earliest known organ prototype was invented by one of the great engineers of antiquity, Ktesibius of Alexandria, in the 3rd century BC. It was called a hydraulis, as the air flow was kept steady by a regulating mechanism using water pressure.)

Brussels was quick to reassure organ builders that their craft was in no danger. All any builder had to do was file for an exemption and he'd get it. But why should they HAVE to?? Why didn't the bureaucrats do their jobs, think it through, and specify the devices and situations they were concerned about with a phrase like "and all similar devices" thrown in to cover anything they missed? Why should the burden be on ordinary EU citizens to correct a mistake the "professionals" never should have made in the first place?

(Note: The bombard is in fact a class of organ pipes, the noisiest ever constructed.)
Posted by Steve T. at 12:23 PM 3 comments:

In this post I shared a few of the sights I found in post-Katrina New Orleans after returning from exile in Jackson. One of those sights was this: 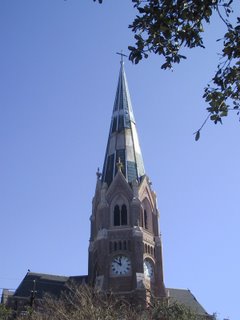 That's the steeple for St. Stephen's Catholic Church, across the street. I was noting in particular how several copper panels had been ripped away by the wind, exposing the wood underneath. The light areas are exposed wood, as the copper had darkened into a rich green patina in the more than one hundred years since the church was built. This shot, from another angle and greater distance, gives a better picture of the height of the steeple: 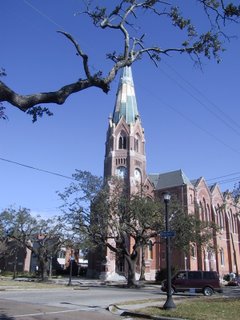 I wondered how they were going to repair this damage, whether they would replace all the copper, or just the missing panels. That would of course give the steeple a rather piebald look, with shiny new copper mixed in with patinaed old copper. For that matter, I wondered just how they were going to physically do the repairs. The spot is not exactly accessible.

Well, on Feb. 21, just before Mardi Gras, I got my answers. New copper mixed with old, and here's how they were doing the repairs: 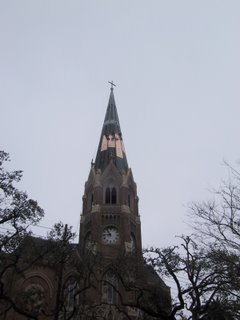 Don't see them? The construction workers in their mountaineering equipment? Well, take another look at the long shot above, to remind yourself of the scale, then check them out here: 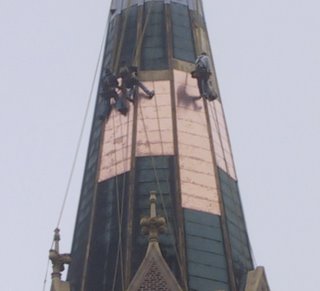 Even if I were a husky 29-year-old construction worker, there is no amount of money in the world that would make me take that job.

The Washington Post's Eugene Robinson just ran a column accompanied by this picture, of a bumpersticker seen on a car at Mardi Gras. 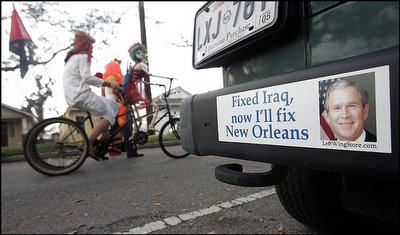 As Robinson puts it: Be afraid. Be very afraid.

Chris Does It Again

I'm not the first to notice this, but one of the most striking changes in New Orleans since It Happened has been the transformation of Chris Rose. Before, his Times-Picayune column was brilliantly written and funny, but definitely light hearted. Slice of life, what a wacky town we live in, that sort of stuff.

But since The Thing (a phrase of his invention) his work has taken on a definite edge. He's not such a happy go lucky guy any more, which is appropriate since none of us is. Since so few businesses in the city are open, for any serious shopping you have to go out to the suburbs, to Metairie, and there is just no way to get there without driving through the destruction. Which is to have your heart re-broken on an almost daily basis.

You have to toughen yourself, or you'd go insane, to the extent that you haven't already. Chris understands this perfectly, which is how he can write such killer columns as this.
Posted by Steve T. at 2:17 PM No comments: