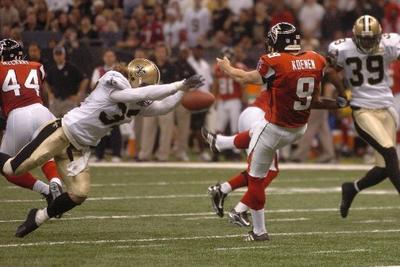 I'm not normally the biggest fan of professional sports, but for Monday's New Orleans Saints game on Monday Night Football I just had to make an exception. Boy am I glad I did.

Even if you didn't watch it, you've probably heard that the Saints methodically dismantled the Atlanta Falcons 23-3. Any home crowd would enjoy that, of course. But as I have gotten to know this city better, I have slowly came to realize just how much this team means to the local fans, despite the fact that it's usually been a pretty piss-poor team, with a dreadful win record. Despite it, or maybe because of it. This city just loves scrappy underdogs, and that's what this team has been for most of its existence. Hell, that's what the city has been for most of its existence.

And of course, Monday was the first time the Superdome was open to the public since the last desperate straggler staggered out during those days of horror a year ago to board a bus going God knows where. Many, many of those same people walked back in Monday evening, filled I am sure with a flood of emotion I cannot even begin to imagine. It was so important to the people of New Orleans to get the Dome, which had become a global symbol of misery and failure, cleaned up and reopened. It was an essential act of cleansing and renewal that would have been hugely powerful, win or lose the game.

And of course, we won. The moment that seemed to redeem everything, that had me gasping with shock as I watched on TV, is shown in the photo. To recap, Atlanta had won the toss and elected to receive the opening kickoff, but had been unable to move the ball through three downs. Ninety seconds into the game and still deep in their own territory they had to punt, and one Saints defender blocked the punt, above, knocked the ball down and back right into the endzone, where another Saint fell on it. Saints touchdown.

I repeat, ninety seconds. The paper reports that Superdome staff -- the old hands, the beer vendors, the security cops, the ticket takers -- say they have never seen anything that came close to the volcanic eruption of jubilation when the crowd saw that play.

As usual, the Times-Picayune's Chris Rose tells it better than I could. Read it all, it's a pleasure.
Posted by Steve T. at 5:53 PM No comments:

I'm a big fan of humorist and sydicated columnist James Lileks. (There's a link to his blog on the blogroll under "Other Links.") He lives in Minneapolis and has a short daily humor column in the Minneapolis Star-Tribune. A few weeks ago he did a column about MyHeinz.com, a fun service from Heinz where you can order Heinz ketchup and mustard bottles with customized labels. Within space limitations for various size bottles and jars, they will make you bottles with labels that say whatever you want, in the same style and font as their regular labels. Not too expensive either. A customized regular size glass or plastic ketchup bottle is only about six bucks.

Some ideas are obvious, like bottles for a family reunion or annual picnic, or for a child's birthday party or something. Lileks was much more creative than that. The one idea of his that I really, really, really like is having bottles made up with labels that read, "You're stoned, young man, and you're not fooling anyone," and sneaking them back onto grocery store shelves.
Posted by Steve T. at 5:44 PM No comments:

Here's another article illustrating how political correctness is strangling our culture in its cradle. Jeffery Taylor is the dance critic of the London Times and a former dancer himself, and he gives an anguished lament about how few leading ballet dancers in Britain, or for that matter just members of the corps de ballet, are native born dancers:

"The top half of any British ballet company is now occupied by foreigners. Royal Ballet is going through a golden age at the moment, but the top dancers are Romanian, Spanish, Ukrainian, Danish and Cuban."

The reason he gives is one I would never have thought of, but it's so obvious once stated. As in much of the US, teachers in the UK are not supposed to have any physical contact with their students, all in the name of "protecting" children. But how can you possibly succeed in teaching ballet if you're not allowed to touch your students? You can't teach it just with words. Sometimes you have to show your student how to stand or move, by gently guiding his body with your hands. How do you teach when this is forbidden?

I never danced ballet, but I did play the violin, so I understand completely. Correct left hand playing position, while not as unnatural and artificial as classic ballet positions, is awkward and must be physically taught. Let me try and show you. Hold your left hand up at the level of your shoulder, about 14 inches straight out forward with your wrist turned around so your fingers are cupped towards your shoulder. Make sure you're sitting up straight and everything's aligned straight up and down. Now take your right hand and, without moving anything else, drag your left elbow to the right as far as you can.

Hurts, doesn't it? But without that position you'll never get full freedom of movement up and down the fingerboard. I started taking private lessons at about age nine, and if my first teacher, Gil Gleason, hadn't been able to touch me, to repeatedly move my elbow with his hand to where it needed to be, he would never have been able to teach me properly.

There's another thing Taylor touches on. Every student starts out thinking that the limits of his ability are less than they really are, and one of the biggest tasks of the teacher is to push the student beyond what he thinks he's capable of. And sometimes the necessary methods are not gentle.

When I was an undergrad at UCLA I played in the first violin section of the American Youth Symphony, composed of the best young musicians from all over Southern California, and conducted by Mehli Mehta, Zubin Mehta's father. Mr. Mehta (we would never have dared call him Mehli) was very old school, having grown up in Bombay in the 20s. He had a very distinguished international career as a concertmaster, conductor, and chamber musician, before coming to teach at UCLA in 1964. (He was also my violin teacher.)

In addition to his immense knowledge and skill as a musician and orchestra leader, he had one very effective tool for motivating us and getting the best out of us during rehearsals: screaming. He was perfectly content to be civil if things were going well, but if he thought we weren't giving him all we were capable of he let us have it, good and hard. Some resented this, but I knew from studying privately with him that this was not a sign of contempt or disrespect, but exactly the opposite. He cared deeply for all his students, much too much to let them settle for just being good enough. He would not let us be anything but the best, and he did what he had to do in order to meet that goal. It worked, too. We were the best.

But all that seems to be gone now. Taylor says that teachers are now supposed to be respectful of their students' opinions, and limit their demands to what the kids are willing to do. How do you push a child to discover his true abilities if you limit yourself to what he already thinks he can do? He recounts:

"When I was a child either they would scream at you, or sit and look at you, or say 'I am going out for a cup of tea; if you manage to jump let me know.' If a teacher did that today they would be arrested."

For the student, one of the most thrilling things in the world is when you do push past what you thought were your limits and can say to yourself, "Whoa! I didn't know I could do that!!" Is it really "respectful" of a child to deny him this epiphany? To deny him the chance to truly grow, by declining to demand of him more than what he thinks is his best? In my opinion, hell no.
Posted by Steve T. at 12:05 PM 2 comments:

In a speech last April, President Bush said this:

One, I believe there'’s an Almighty, and secondly I believe one of the great gifts of the Almighty is the desire in everybody'’s soul, regardless of what you look like or where you live, to be free. I believe liberty is universal.

The trouble is, he's dead wrong, and the reason our involvement with the Middle East is spiraling out of control is that the guy in charge has no idea what he's dealing with.

With Islamofascist terrorists, it's common for people to say, "I just can't understand people like that." That is pure bullshit, a rhetorical trope. They're easy to understand. If you really and truly believe that heaven and hell are real, and that each of us will spend eternity in one or the other, depending on the judgment of Allah after death, then no matter what Bush thinks, freedom is not your highest value and ultimate goal. Your ultimate goal is to get into heaven and avoid hell, and if you believe that freedom, yours our that of others, may stand between you and achieving that, then you will want nothing to do with it. This is not irrational. It is perfectly sensible and reasonable IF you really believe in heaven and hell.

Furthermore, suppose you believe that Allah's judgment will depend not just on doing good and avoiding evil in your own personal behavior, but in how you react to such actions in others? Fundamentalists, whether Islamic or Christian, really believe that if they see evil in the world and do nothing about it, God will hold them accountable. He will hold them complicit in the evil deeds, and this is almost as bad as if they'd done it themselves. This is why fundamentalists have such fury towards people they consider immoral. They believe the immorality of others endangers their own souls, and this drives them into a rage, whether it's Zarqawi blowing up Westerners in Iraq or Fred Phelps picketing Matthew Shephard's funeral in Colorado. The live and let live attitude most of us consider necessary to get along with each other makes no sense to them.

If this is your mindset, then hijacking airliners and flying them into skyscrapers is hardly an act of insanity, it's a sensible, rational thing to do. If we do not understand this, we will be unable to take proper measures to oppose them. That the Commander In Chief, despite being a bit of a fundamentalist himself, does not in fact understand this is appalling and scary.
Posted by Steve T. at 3:27 PM 3 comments: