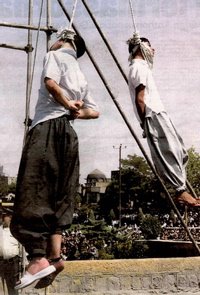 This happened one year ago, but it has not stopped. These two young men were executed because they loved each other, no other reason. The following is an open letter from those who have to live with the fear of this every day. You and I, and those we love, do not. Think about it.

Homosexual Ladies and Gentlemen, transsexuals and transgender, the human right activists and peace lovers along with people who love democracy and equality, we have been informed of a creative protest of July 19th about the discrimination against homosexuals and execution of teenagers with homosexual interests.

With this letter and on behalf of the society of Iranian Homosexuals we declare our support for your act of protest on July 19 (28 of Tir) and wish you success.

Our dear Worldly Friends, 27 years passed form the Islamic revolution in Iran. It is 27 years now that the execution of homosexuals in Iran has been legal. It is 27 years now that women in Iran have been considered secondary citizens. It is 27 years now that the basic rights of students, workers, ethnic and religious minorities in Iran have been denied from them. It is 27 years now that in Iran oppositions and thinkers has been oppressed. For 27 years now the storm of censor has been affecting thinkers and intellectuals and our writers and journalists have been arrested, jailed or lost their right to publish their thoughts and ideas. Because of their ideas millions of Iranians left Iran and emigrate from their homeland. The Islamic Republic has isolated Iran and insulted our people’s intelligence, pride and honor. They have driven our country toward international crises, sanctions and war. Despite all this it has been 27 years that the struggle for peace, freedom, human rights and equality continues. It has been 27 years that we have tried to form various social and political parties and different organizations in order to recognize the rights of minority and stand against execution of children and homosexuals.

It has been obvious that Iranian government does not recognize homosexuals’ rights in Iran. They publicly declare that there are no legal limits for transsexuals and legally they can have a transgender surgery (which is very expensive). They use this as an excuse to deny existence of homosexuals and believe that every one should be a heterosexual man or woman. According to this belief every one that has a “problem” should have an operation and “transform” her/himself. In other words the government does not recognize the sexual diversity.

Let along that even for transsexuals no social prospect is provided after the operation and many of them have to fall into prostitution in order to make a living. Denial of homosexuals in the country, their oppression and complete ignorance of their rights has caused many homosexuals to live in the worst psychological and social condition which results in frequent suicides, depression and seeking asylum to other countries.

Today’s world is more like a village and unlike in the past, the governments cannot hide the oppression and refusal of the civil rights. When people’s battle to achieve democracy and freedom faces government’s oppression and resistance, they have the right to reach out to the rest of the world and reveal their government’s wrongdoings.

We, a group of homosexuals inside Iran, are glad and welcome the fact that the lack of democracy and human rights especially in treating homosexuals has come to your attention. Using this letter we express our appreciation and admiration for the united efforts of all the organizations, which support human rights and rights of the homosexuals around the world, in opposing the execution and the increase of pressure on sexual minorities in Iran. Together with you all we also ask the Iranian regime to put a stop to all executions, especially juvenile executions, change the regulations designed to punish homosexuals, guarantee equal rights for the citizens, stop censorship and accept rights of different groups and NGOs to create independent organizations.

Together with you all we also express our opposition to any military offensive against our motherland and believe that any such action will turn Iran into another Balkan will destroy the current dynamic movement for human rights and democracy in Iran.

To our friends all over the world once more we send our support and appreciation for your protest on July 19th and we believe that freedom and democracy in Iran is achievable throughout efforts and struggles of the Iranian public and actions of different social groups. The Persian Gay and Lesbian Organization attempts to join its efforts with other social movements of the country in order to create a strong social right movement. We need your support and the support of all other groups and countries and we highly value all international supports.

We are honored by your attention to the human rights situation and the issues around ignorance of homosexuals by Iranian government. We will try our best to publish your message widely and we will join you by all means on July 19th even if it is only a symbolic act of lighting a candle next to our window. The hope for the better world will be always in our hearts.

We hope for the day that we meet face to face in the first Gay Pride Festival in free and democratic Iran.

Who really needs to get married?

New York state's highest court ruled this week that state laws preventing gays from getting married are not unconstitutional, and may stand. Whether the ruling is a setback for the gay marriage cause or not is debatable -- Andrew Sullivan thinks it's high time to move the emphasis from courts to legislatures -- but what strikes me as both pathetic and hysterically funny is the reason the court gave for its ruling: We're too responsible.

With stunning insight the court observed that a boy and girl vigorously going at it can wind up starting a pregnancy without intending to. (Amazing! Who knew?) They also noted that it's much better for children to grow up with a mother and father than in a single parent household. Therefore, they reasoned, the state has a compelling interest in promoting marriage between straights, an interest that doesn't exist with gay couples.

In contrast with these reckless and irresponsible heteros (we don't call them "breeders" for nothing), gay folks boinking away cannot start a pregnancy, intentionally or not, no matter how enthusiastically we try. Gays who really want to raise a child can do so of course, through adoption or artificial insemination, but it takes quite a bit of effort to do it. Gays can be presumed therefore to take parenthood seriously, as something we have to choose and pursue, unlike those straights who just sort of tumble into it. So we have no need of the encouragement towards responsible behavior that society bestows on straights by allowing them to get married. (See analysis by Yale Law prof Kenjio Yoshino.)

My my. We've come a long way since Pat Buchanan said we had "declared war on Nature," and that AIDS was Nature's terrible revenge. (Did no one tell Pat that, globally, most AIDS sufferers are straight?) Now it seems that Nature has endowed us with innate virtues of probity and restraint, reproductively speaking. Ol' Ma N. must think pretty highly of us. Never mind that while this argument may be a reason for encouraging marriage between straights, it gives no reason for dis-couraging marriage between gays, especially since having kids has never been a prerequisite for getting or staying married anyway. Never mind that while gay men used to be sneered at for our presumed promiscuity, the court now says that straight relationships are “all too often casual or temporary," and therefore need marital shoring up.

No, what's truly ludicrous is that this argument relies on what can only be called a demonstrably failed policy. While the numbers have declined in recent years, nearly half of all teenagers have lost their virginity by the time they graduate from High School. (Source: U.S. government.) If marriage is supposed to counteract that, it's got a hellishly high failure rate. Which, after all, stands to reason. How often does a horny 17-year-old with a ready and willing girlfriend stop fumbling with his belt buckle to think, "Wait a minute. Are we married yet?" Yeah, yeah, that's what he's supposed to think, but in practice? To us the Puritans are the prime example of sexual restraint and repression, and the word puritanical is the ultimate symbol of it. But historical studies have shown that in Puritan New England, up to 40% of brides were pregnant on their wedding day. Move up to our present hypersexualized culture and what do you expect? Please.

Whether the kids should be carrying on like that is another topic, one I won't go into now. But such a dubious rationale is a pretty flimsy basis for keeping a whole class of Americans second-class citizens.
Posted by Steve T. at 12:19 AM 4 comments: