As I've started getting reoriented to living in a drastically altered New Orleans, I've been taking pictures as I drive around. I'm going to start sharing some of them right here. You can click on any picture to get a closer look. Let's start in my immediate neighborhood. 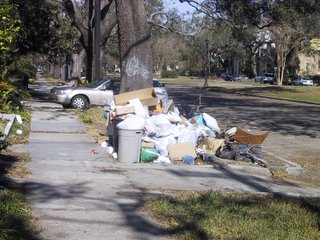 This is a pile of trash in front of a house on my block, waiting for the city to get around to picking it up. This is a fairly small pile, as the house was not significantly damaged. There are piles like this all over the place. 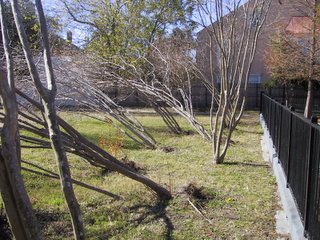 The park in the next block where I walk my dog. When we left for Jackson, these trees were all standing straight up, and looked alive. Neither now, it seems. Note that branches are not broken by any impact. Nothing hit them to knock them over. Only wind.

Remember, this is the part of town that got off easy when Katrina came through. 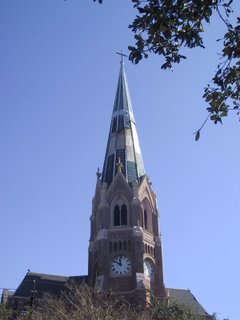 The steeple of St. Stephen's Catholic Church, directly across the street from my house. It used to be completely sheathed in copper. Not any more.

I wonder who got the copper? 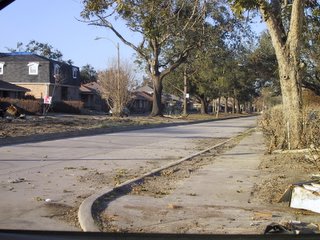 I've been driving around the city as well. This is a street in an area known as Lakeview, which lies between the Orleans Ave. canal and the infamous 17th Street Canal, the one that broke open.

Not one house on this street is habitable. There are hundreds of miles of streets like this in New Orleans. 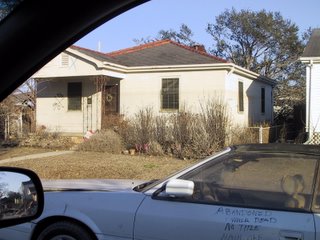 On the walls of the house in the background you can see a horizontal line, with the wall appearing slightly lighter in color above it and slightly darker below it. The line would be right about at eye level of someone standing in the doorway. This indicates the flood level, the maximum height to which the water rose. To visualize what really happened it helps to picture the space between the house and the house seen at the right edge filled with water to that point. Now extend it. Imagine the water extending towards you at that height, then away from you, then right and left, for miles. That's a lot of water.

The car, on the other hand, has written on its door "Abandoned / owner dead / no title / haul off." No one has, yet. As the flood level marks on the house indicate it was completely submerged when the water came, no one has bothered to try stealing it either. What would be the point?