Back to the Misery Tour

In December Time magazine ran their annual feature of the best photos of the previous year. Not surprisingly, Katrina photos led the pack. One of the most dramatic was this photo by the acclaimed photojournalist Thomas Dworzak: 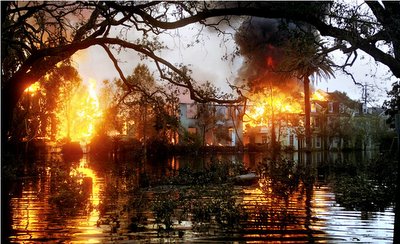 It captures vividly the unreality and sheer craziness of the situation in New Orleans at that time, just after the storm had passed and the levees had broken; buildings surrounded by water yet engulfed in flame. [Note: click on any of these pictures for a closer look.] Time made only one mistake. In the photo caption they located this scene in the Garden District, an area closer to Downtown where many of the most beautiful old 19th century mansions can be found. It isn't. It's Uptown in the 2100 block of Napoleon Avenue, about ten blocks from my house. This is what that center building looks like today: 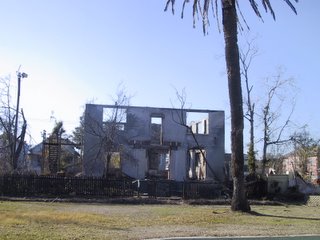 The grass in the foreground is where all that water was. It's a small park with a playground. I sometimes walk my dog there. That palm tree can be seen in Dworzak's photo, silhouetted against the right edge of the right-hand fireball. The houses producing that fireball were fairly expensive condos. This is what's left: 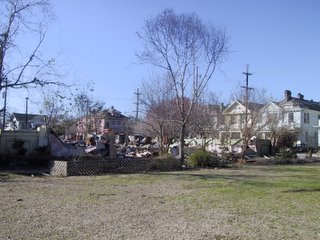 In the center of this photo is a sort of rust-covered metal frame. That is the skeletal remains of an upright piano. 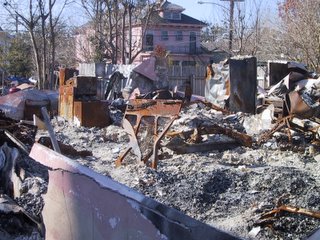 If there's any good news, it's this. I've learned to read these sort of markings well enough to know that the "0" on the bottom means no bodies were found here. The people who lived here may have lost all their possessions, but not their lives. 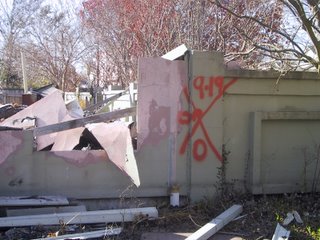 What's depressing is the realization that, since I drive past here fairly often, I'm going to have to look at these ruined shells for months, if not years. There's too much work to be done on houses that can still be salvaged to spare any effort to clean up a total loss like this.
Posted by Steve T. at 3:58 PM

Enjoyed the pictures and commentary on the city post-K. Keep up the good work!

Yes, your Crescent City commentary is interesting, a fresh tennies-on-the-ground perspective. Do more. Let us know how friends have done. Oh, and is Franky & Johnny's open?

Weird note: Searching to check the name, found a mention at an about.com site with the ironic address 'goneworleans'.