Done In Our Name

It's possible, but we don't know, because the Bush administration locked him away as an enemy combatant and refused to give any information about the charges against him. Not until the threat of a Supreme Court ruling forced them to. So they changed his status to an ordinary criminal defendant, with charges against him that -- tellingly -- include nothing about the terrible things they told us he was plotting to do when he was first arrested, in a very high profile bust.

Now the New York Times is finally giving us a glimpse of what he's been subjected to, since as an ordinary criminal defendant he -- finally!! -- is getting the right to proper legal representation, and his lawyers are finally getting some facts out. What's coming out is horrifying.

His lawyers have released photos from an incident when he was taken to the prison dentist for a root canal. Judging from his overall treatment, he must have been in agony before they would agree to such basic medical care.

To get out of his cell for this, he first had to stick his unshod feet through a hole so they could be shackled. 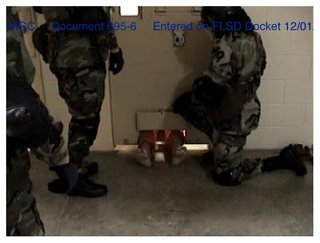 He then had to stick his hands out another hole to be shackled as well. Then military guards in riot gear, including full face masks, went in to retrieve him. 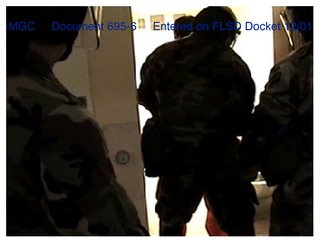 He was brought out, and by his lawyer's reports, and those of psychologists examing him, he is an utterly broken man, unable to tell between delusion and reality. He is also utterly passive, completely beaten down, with about as much initiative and aggression as a piece of furniture. 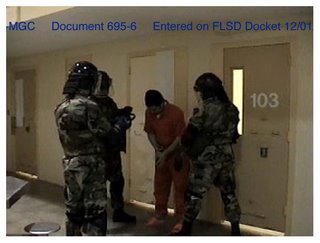 And yet they not only shackle him for a trip to the dentist within the prison, but blind him and block his hearing. 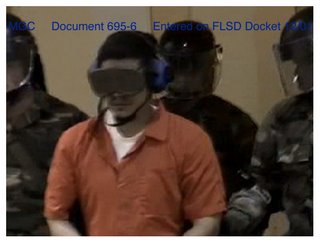 Why are they doing this? He's not the Incredible Hulk, he's a broken shadow of a man, and they know this better than anyone else because they're the ones who broke him. What justification can there be for this? And we know this much about Padilla because he is an American citizen. Just imagine what's going on at Guantanamo.

Besides, just look at the pictures of those military guards. Look at them! There have been many SciFi novels and movies about society degenerating into a dystopia of totalitarian terror, with government whipping us all into line in the name of keeping us safe. Safe for democracy! Safe for freedom! In those stories the rulers say that because of the emergency -- there's always an emergency -- they're taking democracy and freedom away for a bit and putting them both into cold storage, safe keeping you know, and they'll let us have them back once this is all over. Trust us. And do as you're told by the nice policemen.

The nice policemen in riot suits and masks who look just like the ones being so nice to Jose Padilla.

IF Padilla knew anything about terrorist threats to the US, the interrogators got it out of him long ago. Not only that, but whatever he knew is stale info, as the bad guys have changed plans and tactics a hundred times since he was arrested. There can be no justification for continuing to treat him this way, unless it's just an exercise in pure sadistic cruelty. The ultimate irony may turn out to be that they've damaged his mind so severely that he's legally incompetant and can't be prosecuted.

Maybe Bush/Cheney/Rumsfeld just needed to prove to themselves that they're the meanest badasses on the planet. Can you imagine what sort of Gitmo torture-porn photos have crossed the desks of these people? I would shudder to think that they literally beat off in the john looking at such photos, but I can no longer put it past them.
Posted by Steve T. at 10:47 PM

Thanks for the post. This is a truly horrifying situation and will only get worse if people continue to ignore just how monsterous this administration is.