Yesterday's New York Times arts section had a fascinating story about an internet mystery. About eight months ago a video started showing up on video sharing sites, including YouTube. It showed a young man in a blue t-shirt and baseball cap sitting in his bedroom by his computer, playing a hellishly difficult rock arrangement of Pachelbel's Canon, of all things, on electric guitar. 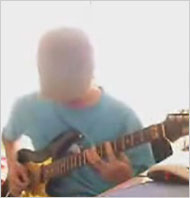 It quickly became an Internet sensation. On YouTube it has been viewed over seven and a half million times. If it were a commercial release it would have gone platinum many times over. One of the striking things about it was the guy's seeming modesty. There is none of the rock star histrionics that seem almost mandatory for guitar solos. He just sits there with his head down and plays his ass off for five and a half minutes.

It had all the ingredients to be a massive Net phenomenon. A bitchin arrangement, with background track supplied by the computer, an awesomely virtuosic performance, and that extra special touch, an air of mystery. Because what everybody wanted to know was, who the hell IS this guy?? The title card identifies him only as "funtwo." The cap visor covers his face almost all the time, and he's sitting in front of a window with blazing sunlight coming through, which obscures what little you can see the few times he lifts his head. All you could tell for sure from the skin of his arms is that he wasn't a black guy. Here's the video.

Of course, the Times ran the story because they'd tracked him down. So who was he? Click "read more" to find out. 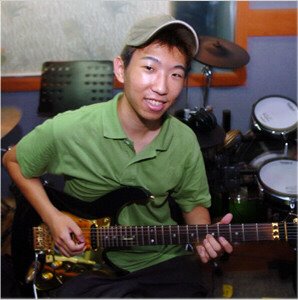 Jeong-Hyun Lim, a 23 year old self-taught South Korean living in Seoul. The arrangement was actually by a Taiwan guitarist with the net name of JerryC. Lim decided to work up a performance of it, put it online, and see what everybody thought. As the article observed, it's a fascinating glimpse of a subculture I had no idea existed. Not Asian guitar gods, because I know one here in New Orleans, June Yamaguchi from Kyoto. No, guitar fanatics who make videos of themselves and send them to each other and post them online, so that everyone can critique each other. There are thousands of these things floating around, which is fascinating.

I think this has just become one of my favorite performances of an otherwise horribly overexposed piece.
Posted by Steve T. at 5:43 PM