Me: Beheaded and Going to Hell

I'm afraid that will be my fate after linking to these cartoons. You remember cartoons. Those ones depicting Mohammed that appeared in a Danish newspaper, and led to murderous riots all over the place. Those.

Well, you can look at those elsewhere, but someone connected with the Freethinker magazine, "The Voice of Atheism Since 1881," apparantly decided, you want blasphemy? I'll give you blasphemy, in the form of Jesus and Mo. It's a crudely drawn cartoon whose two characters are Jesus and Mohammed. They're a bit bothered by how they're perceived by their modern followers. 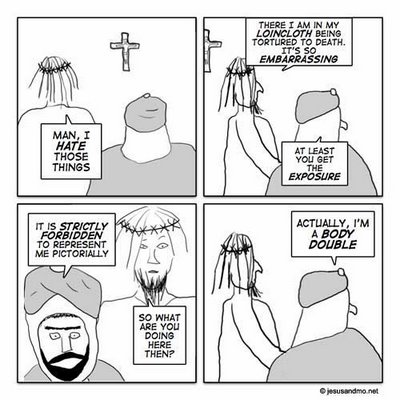 They seem to be roommates and drinking buddies, and if they're not lovers they're skittering around the edges: 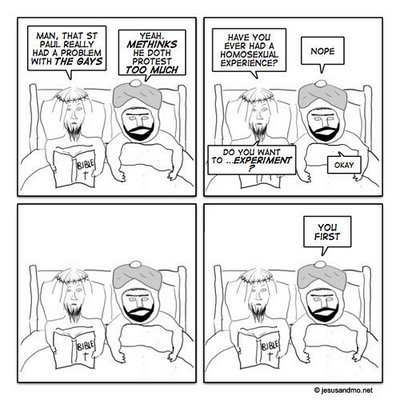 And when they're not playing video games, they're having arguments with the atheist barmaid at their favorite tavern: 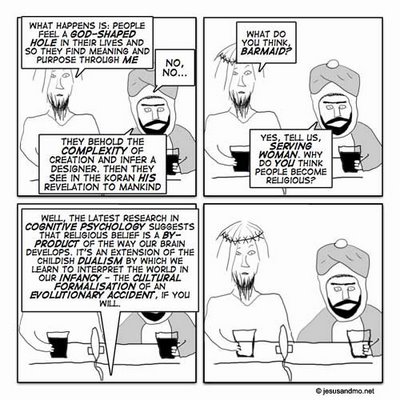 Here's the link to the start of the series. From what I read in the papers, I can expect scimitar wielding avengers to show up here in New Orleans soon for my temerity in posting these. And once they lop my head off, well, down I go.
Posted by Steve T. at 11:34 PM