One for the Record Books

I swear, every time I tell myself this election just can't get any weirder, it does. I was startled enough with the Mark Foley business, but now this with Pastor Ted Haggard is just unbelieveable. Except that it isn't. It's far too believeable. What a sad commentary that he seems to be more willing to appear to be a crystal meth user than a guy who likes to play on the other team now and then.

And what timing. By the way, I think it's disengenous of the evangelicals in damage control mode to try and minimize this by saying it's just politics. Of course it's politics! Mike Jones, the hustler who outed Pastor Ted, said he did it because of the upcoming election, and the antigay state constitutional amendment that Haggard was supporting.

You've heard of the film "Jesus Camp"? It's a current documentary about a rather chilling youth camp, in Kansas I believe, which indoctrinates children from a very young age to be political warriors for Jesus. "Indoctrinate" means just that. I heard a discussion on the radio about this, describing a child of about six saying how he had been searching for the meaning of life, and found it when he came to Jesus. Excuse me? A six-year-old losing sleep about the meaning of it all? Forget it. The poor kid was programmed to say what he did.

Pastor Ted has a cameo in "Jesus Camp," as it turns out. The filmmakers went to his church, the New Life Church in Colorado Springs. They filmed him preaching to his flock, saying, "We don't have to debate what we should think about homosexual activity. It's written in the Bible." Then he spots the camera, leans in close and says into the lens, "I think I know what you did last night." Then straightens up with a smirk and says, "If you send me a thousand dollars, I won't tell your wife." Shrieks of laughter from the crowd. You can see it on YouTube here.

How horrible. He was no doubt trying to stave off one of his own deepest fears, blackmail, by mocking it. Even worse than blackmail, of course, is exposure, which he is now facing. When you know his secret, the self-loathing on naked display in that clip is chilling.

And it's not as if this should have come as a huge surprise to anyone. Take a look at this painting by Thomas Blackshear: 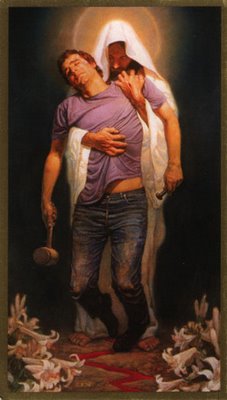 Know where it's hanging? In the foyer of Pastor Ted's New Life Church. I don't know if he picked it out himself, but he certainly didn't object to it. And this is what the congregation sees when it comes in every Sunday. There are other Blackshears there too but this is the most homoerotic. Yeah, yeah, I know it's supposed to be Jesus lifting up a poor sinner weary with the evils of the world, but was it necessary to make it look like The Lord's starting to slip the guy's shirt off? Off of a guy who looks like he's thinking, if I just go along with this and don't say anything, it's gonna be really, really hot! Honestly, is this difficult for anyone to decode?

Man. I actually can feel some sympathy for Haggard, even though he brought it all on himself. But I feel terrible about his wife and kids. They didn't do anything wrong, except perhaps refuse to see the clues, but now their entire world has been torn to shreds. His kids were in the car for that agonizing TV interview Haggard gave, trying to sell that story about buying the crystal meth out of curiosity, but throwing it away before trying it. I can't imagine the misery of hearing your father try to save his skin with a pathetic lie like that. I expect any one of them could have come up with something more convincing if he'd just asked them for help.

What this whole mess, as well as the Mark Foley scandal, just goes to show is the horrible destructiveness of the closet. The damage it does to people and families when someone is forced to try and be someone he is not. It is a terrible place, the closet, and I'm so glad I got out of it as early as I did.

Mark Foley. Pastor Ted. Can't get much worse for the political and religious right than that. And at the top, a president so delusional he thinks he can still persuade us things in Iraq are going pretty well, and getting better all the time. Plus a Republican Congress that became so addicted to raw power that it abandoned all pretence of bipartisanship, even shutting Democrats out of committee meetings. It's not supposed to work like that. Not to mention the incredibly blatant corruption, just raking in the cash.

I'm with Andrew Sullivan on this. If all goes well this won't just be an election. It will be an an intervention.
Posted by Steve T. at 5:15 PM